This publication is a Technical report by the Joint Research Centre (JRC), the European Commission’s science and knowledge service. It aims to provide evidence-based scientific support to the European policymaking process.

This Technology Development Report is an update to the version produced in 2018. In the report, they focus on three main technologies, namely:

-       Thermochemical conversion: Lignocellulosic materials such as forest and woody resources, and lignin-rich, non-fermentable residues are converted to synthetic fuels and chemicals

-       Oleochemical conversion: Production of road HVO and aviation HEFA based on hydrotreating of lipidic feedstocks.

In the report, they conclude the following regarding the three technology pathways:

-       Fermentation: The focus of a considerable share of the H2020 projects on fermentation is on proving the robustness of the entire cellulosic ethanol production chain, which is a very welcome approach. Further optimising the performance of new processes and saccharification/fermentation yields, and improving economic and environmental performance (and hence reducing costs) remain critical. Focus has been mainly on ethanol production, but we see large investigations taking place on butanol production, certainly within the EU.

-       Anaerobic digestion (AD): The European AD sector is clearly oriented to improve the digestion of lignocellulosic feedstocks (mainly agricultural residues such as straws) and other complex waste streams (i.e. sludges from wastewater treatment plants), in order to tackle the relevant issues of feedstock availability and sustainability. Technological improvements are however still needed to fully demonstrate the possibility to economically use such feedstocks; processes integration seems currently to be an interesting route to overcome the present barriers.

-       BtL and SNG: For the time being, no large-scale gasification plants producing BtL biofuels are in operation. Possible future improvements on which R&D activities may concentrate the efforts include e.g.: (1) optimization of the process at smaller scales, developing new concepts which are suitable to smaller size range resulting in lower capital and operational costs, (2) process integration within the whole plant to improve the overall energy balance of the plant reducing the need for external energy imports. The integration can be also with industrial sites or district heating networks and (3) Development of biomass handling and reliable gasification systems with greater feedstocks tolerance also able to produce a high-quality syngas.

-       HTL: The HTL pathway, which has been proven in laboratory and/or pilot units, appears as a promising option to produce bio-crude oil that can be blended with traditional fossil crude and with a view to their being upgraded at existing oil refineries.

For FAME and HVO, work to find more sustainable feedstocks will be necessary especially given the move away from food-based feedstocks for biofuels, and the large increases in HVO production capacity in the EU. On this aspect, the possibility to be more flexible with respect to the feedstocks is a key element, currently driving the sector technological development. 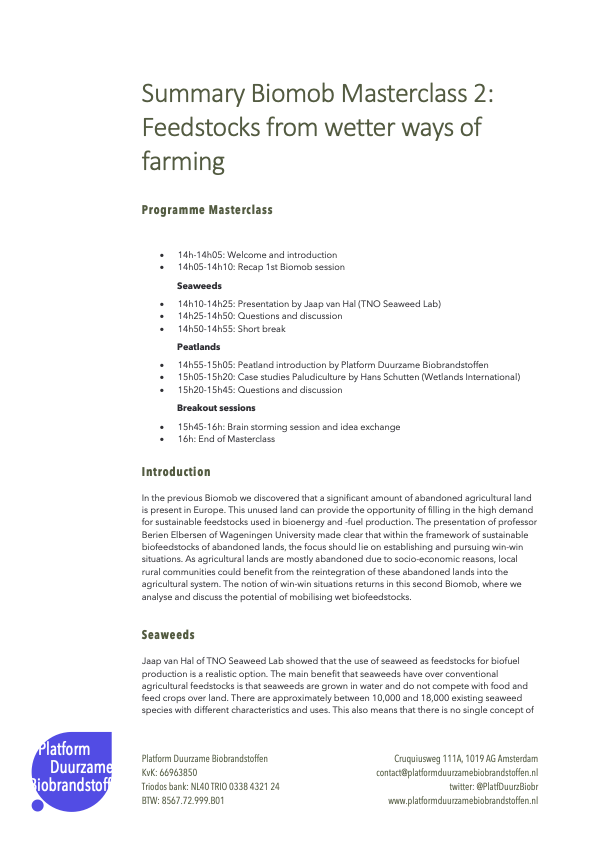